Rory Gallagher born (2 March 1948-14 June 1995) was an Irish blues-rock multi-instrumentalist, songwriter, and bandleader. Born in Ballyshannon, County Donegal, Ireland, and raised in Cork, Gallagher recorded solo albums throughout the 1970s and 1980s, after forming the band Taste during the late 1960s. A talented guitarist known for his charismatic performances and dedication to his craft, Gallagher's albums have sold in excess of 30 million copies worldwide. Gallagher received a liver transplant in 1995, but died of complications later that year in London, England at the age of 47. 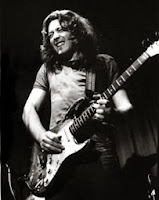 Gallagher was born in Ballyshannon, Co. Donegal; his father, Daniel, was employed by the Irish Electricity Supply Board, who were constructing a hydro-electric power plant on the Erne River above the town. The family moved, first to Derry City, where his younger brother Dónal was born in 1949, and then to Cork, where the two brothers were raised, and where Rory attended the North Monastery School. Their father had played the accordion and sang with the Tir Chonaill Ceile Band whilst in Donegal; their mother Monica was a singer and acted with the Abbey Players in Ballyshannon. The Theatre in Ballyshannon where Monica once acted is now called the Rory Gallagher Theatre. Both sons were musically inclined and encouraged by their parents: at age nine, Gallagher received his first guitar from them.
He built on his burgeoning ability on ukelele in teaching himself to play
the guitar and perform at minor functions. After winning a talent contest when he was twelve, Gallagher began performing in his adolescence with both his acoustic guitar, and an electric guitar he bought with his prize money. However, it was his purchase three years later of a 1961 Fender Stratocaster for £100 that became his primary instrument
most associated with him for the span of his lifetime.
Gallagher was initially attracted to skiffle after hearing Lonnie Donegan on the radio; Donegan frequently covered blues and folk performers from the United States. Subsequently, Gallagher began experimenting with folk, blues, and rock music. Unable to find or afford record albums, Gallagher stayed up late to hear Radio Luxembourg and AFN where the radio brought him his only exposure to the actual songwriters and musicians whose music moved him most.
Influences he discovered, and cited as he progressed, included Woody Guthrie, Big Bill Broonzy, and Lead Belly. Initially, Gallagher struck out after just an acoustic sound. Singing and later using a brace for his harmonica, Gallagher began to learn to play slide guitar. Throughout the next few years of his musical development, Gallagher began learning to play on the alto saxophone, bass, mandolin, banjo, and the coral sitar with varying degrees of proficiency. He found it difficult to track down the names of the authors of the blues songs that he heard; usually through the likes of skiffle musicians like Lonnie Donegan. He relied entirely on radio programs and television. Occasionally, the jazz programs from the BBC would play some blues numbers, and he slowly found some song books for guitar, where he found the names of the actual composers of blues pieces. While still in school, playing songs by Buddy Holly and Eddie Cochran, he discovered his greatest influence in Muddy Waters. By his mid-teens, he began experimenting heavily with different blues styles.

Gallagher began playing after school with Irish showbands, while still a young teenager. In 1963, he joined one named Fontana, a sextet playing the popular hit songs of the day. The band toured Ireland and the United Kingdom, giving him the opportunity to acquire songbooks for the guitar, where he found the names of the actual composers of blues songs, in addition to earning the money for the payments that were due on his Stratocaster guitar. Gallagher began to influence the band's repertoire, beginning its transition from popular music, skirting along some of Chuck Berry's songs and by 1965, he had successfully molded Fontana into "The Impact", with a change in their lineup into an R&B group that played gigs in Ireland and Spain until disbanding in London. Gallagher left with the bassist and drummer to perform as a trio in Hamburg, Germany. In 1966, Gallagher returned to Ireland and, experimenting with other musicians back home in Cork, decided to form his own band. 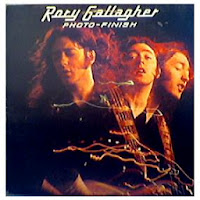